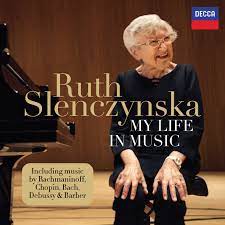 Ruth Slenczynska: My Life in Music

My Life in Music is inspired by Slenczynska’s personal connections with Rachmaninoff, as well as American composer Samuel Barber, who was her fellow student and friend. Slenczynska heard Barber’s now world-famous Adagio for Strings in the classroom, before it even had its title.

Slenczynska also explores the music of Chopin throughout the new album, including a piece she performed at the memorial service of one of the greatest pianists of all time, Vladimir Horowitz, a life-long friend. Chopin’s music formed Slenczynska’s musical foundations, with her father making her play all 24 Études before breakfast every morning. Slenczynska went on to earn a reputation as one of the most celebrated Chopin interpreters. The album also features pieces by Debussy, Grieg and Bach which, for her, conjure memories of some of her great piano mentors: Egon Petri, Alfred Cortot and Josef Hoffman.

A phenomenal performing career has seen Slenczynska appear at some of the most prestigious concert halls around the world, as well as for the likes of President Reagan, President Kennedy, President Carter, Michelle Obama, the (now former) Empress Michiko of Japan (with whom she is friends), and even play a duet with President Truman. She has also written extensively with many articles published and two books to her credit.

Still an active performer, Slenczynska performed at the 2021 Chopin International Festival and Friends in October 2021 in the Polish Embassy in in New York and is set to celebrate her 97th Birthday with a recital at Lebanon Valley College, PA, on 6 February.