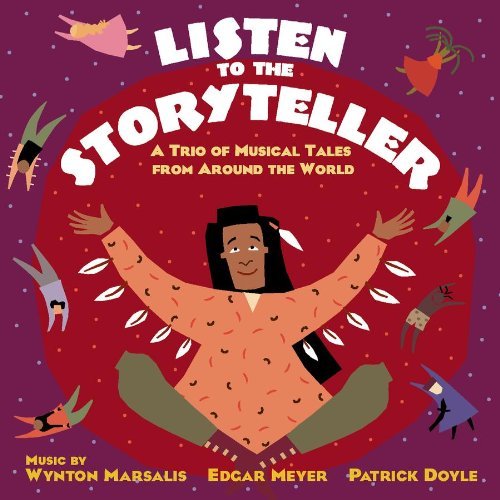 Listen to the Storyteller: A Trio of Musical Tales from Around the World

A sterling companion to the like-titled book, Listen to the Storyteller assembles three original narratives spun from Afro-Caribbean, Celtic, and Native American traditions. Scored in the classically appealing style of Prokoviev’s Peter and the Wolf, Storyteller features exquisite compositions by notables Wynton Marsalis, Patrick Doyle, and Edgar Meyer. “The Lesson of the Land” pairs the even tones of Graham Greene with the famed Tennessee duo of bassist Meyer and dobro player Jerry Douglas. Kate Winslet narrates “The Face in the Lake” as Doyle’s eloquently arranged string and woodwind sections make the music of the seasons. That tale begins “Once upon a very long time ago, when butterflies knew how to sing and the stars whispered to the trees,” telling the travails of a beautiful maiden and her jealous brother. Stepping lively, Marsalis steals the show by performing the voices of each character in “The Fiddler and the Dancin’ Witch,” about a hard-headed boy so in love with music that he must battle a dancing witch for possession of a magic fiddle. –Paige La Grone